skip to main | skip to sidebar

The Zak Adama story is at an end, but I was so frustrated with the official ending that I've reimagined the finale and written my own alternative ending, that includes Zak Adama as a Cylon.
Posted by rakerman at 12:06 PM No comments:

I think I had a pretty good track record of predictions.
The solutions to some mysteries were rather more handwaving than I was expecting.
There were some surprises.

I was mostly ok up to first ending.

End of Line
Posted by rakerman at 11:12 PM No comments:

In case you were thinking, "I should go back and check what Hera was drawing..."

An arc that she carefully counts - there are 13 - presumably representing the First Five and the 8 models. 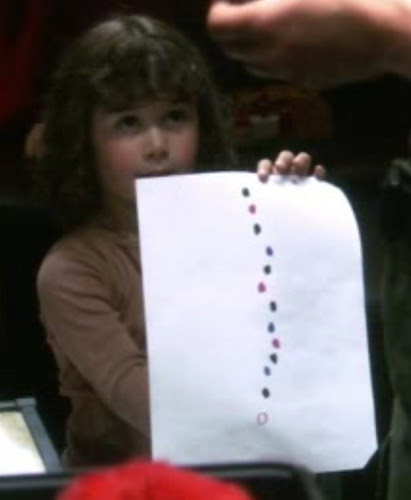 Battlestar Galactica 4x19 - in which we prepare for the end

I didn't think Ron Moore would make the entire second half of the last season a long goodbye and leadup to a grande! finale! ... but he did. Oh well.

Didja see Zak? You've seen him in the past now... will you see him in the present...
Posted by rakerman at 10:58 PM No comments:

Not a lot to say. I thought Ron Moore would give us a double-peak - some action around 4x17 and 4x18 and then a grand finale, but it seems now certain it will only be Grand Finale.

It goes something like - Adama moves flag to baseship, farewell Galactica old girl,
Sam jumps Galactica to see The Beings of Light or whomever is running this show,
baseship Hybrid maybe jumps to Colony?

Zak Adama or The Architect or Beings of Light or somebody (14th colony of hybrid human-Cylons who found peace and enlightenment? Ascended beings? Lorne Greene? I'm running out of ideas) Explains All and then Cylon home and human home learn home is a place where love makes its nest or some damn thing, Hera projects a vision of the Opera House, Baltar and Caprica Six reconcile, the dying president smiles upon them and we all live happily ever after.

(Can you tell I'm getting a bit tired of Moore dragging this out?)

Anyway:
* Kara definitely human - which means her father was NOT Model 7 Daniel
* never plug a robot into your ship (it's like they've never watched Star Trek: The Next Generation - oh wait, that's where Moore practiced his craft)

More speculation:
* Sam has The Knowledge what with being some combination of ascended being and Liam with some access to the music of the spheres that unifies everything
(when you think about Cylon "organic memory transfer" technology, it has to be something about tapping into some sublayer of consciousness, otherwise how does it just pick consciousnesses out of the ether and install them in new bodies - which of course begs the question, why just Cylon consciousnesses? why can't you just pick ANY dying brainwaves out of the celestial harmonies and download them into a new body? surely that must be what happened with Kara?)
* Cavil will end up like Sam, becoming a ship (Cavil has stated pretty clearly he's more interested in being machine than man)

In summary, my current best guess is just an extension of previous "all shall be made one" theories:

Kara Thrace, thanks to Sam jumping her to the right destination, finds the puppet masters, who are either some beings tapped into the oneness of it all ("Beings of Light") or an unknown 14th colony of hybrid Cylon-humans. The future is Cylon-humans. "The end of humanity." Hera is their future. Baltar and Caprica Six are second human-Cylon couple. The end.

PS Ron Moore, please give us one last space fight at the Colony, before Kara and Sam jump in with the answers that bring Peace.

PPS Zak Adama is a Cylon
Posted by rakerman at 7:50 AM No comments:

A good episode, but Ron Moore is running out of time.

Confrontation with Cavil coming.
We're still behind the schedule I anticipated - I thought it would be

Kara Thrace - chain with ring and dog tag...
where was she for two months?

Dreams of Her Father - Dreilide Thrace - was he Model 7 Daniel? Or was he one of the Others, the Puppet Masters... whomever is sending visions of angels. Ancients? Gods? Beings of Light? 14th Tribe?

My personal opinion continues that he was NOT Daniel.

Hera knows the song that called the Four... it wasn't completely clear if this was Kara's childhood song but was certainly implied.

In the (paraphrased) words of Ellen: someone is manipulating them all.

Also: Zak Adama is a Cylon.

UPDATE: I forgot to mention one good theme, the theme of loss... remember we're all going to lose Galactica soon. The ship slowly coming apart at the seams, Kara's loss of Sam and her father, the Cylons and Humans lost home, the loss of Hera... one of the things when you come to the end of a series is to try to recognize that loss, the end of our collective experience.

UPDATE #2: We had heard a long time ago about Cylon "projection", when Baltar was on the Baseship and was saying something about it being rather dull, one of them told him something like the Cylons just projected and imagined themselves walking through a forest. This was the first time we saw a Cylon project to another Cylon though. It was also clear that it didn't require physical contact - Tyrol and Boomer were separated by glass. That ability is reminiscent in kind, if not in extent, to the visions that Baltar has of Six and (possibly) the vision that Kara Thrace was having of her father. Is there a Ghost in the Machine? Are they seeing remote projections?

UPDATE 2009-02-28: I should mention that in the webisodes when the 8 was checking the Raptor's computers, she also referred to this as projection - and one can assume the baseship computer interface technology is similar.
Posted by rakerman at 11:04 PM No comments:

Kara Thrace: Ok, what the hell's going on? I'm off the ship for a few hours and...
Sam Anders: A few hours? Kara you were gone for over two months.

And the critical scene: Lee Adama: Dad, what if Zak had come back to us in that viper? ... If my brother had climbed out of that cockpit... would it matter if he were a Cylon? If he always had been? When all's said and done, would that change how we really feel about him?
Bill Adama: (silence)

Battlestar Galactica - 4x01
Posted by rakerman at 8:40 PM No comments: